“ I have always painted. I like to paint alone, not knowing where it could lead me. My Mom probably, sensed it first, guiding me to art studios in Paris. I do remember The Louvre, still with its garden in the centre, and entering on the main floor, facing “La Victoire de Samothrace”.
To show my work for the first time, was a chance. It was all watercolours, “Marines” as they are called, a play on light between ocean and skies.
I loved to “play” with water and pigments on paper. After moving to Canada, and not being able to practise my trade, architecture, I returned to draw. Mostly floral, while simplifying the background, to finally literally making abstraction of it, I stepped unknowingly into Sumi-e. . Barbara, my wife, was very open about my quest in painting. Yet, I deeply knew, I needed a Master to guide me. It is then that I met Alain Bonnefoit, a renown master of nudes, in oils and Sumi-e. Bonnefoit was a student of Volti, a Master in monumental sculpture in Paris. Alain pushed me to understand the “line”. And to this day, when my work is exhibited in Japan or China, it is always under Calligraphy. The art of telling the essential, while leaving lots of empty spaces. Contrary to Western painting, which fills the artwork with pigment, the Sumi-e artworks “relies” on the empty space to be. As Francois Cheng describes it so well in his book: “Le vide et le plein” (The empty and the full).
Life became full circle when my artwork started to be exhibited in China, native land of our three daughters. We had promised to teach about their cultural heritage, and now, China was exhibiting my work. I can’t say what “drives” me. The frozen" Lake Huron" lead me to "waves". And I remained on waves for months exploring its movement and inner life. I don’t have a destination; the road is the fascinating part. Being jury selected to enter “Le Salon d’Automne”, “Le Grand Palais”, Salle “Le Nôtre” at “Le Carrousel du Louvre”, in Paris, France, or the “Osaki Museum” in Tokyo, Japan, have comforted me in my quest for meaning.” 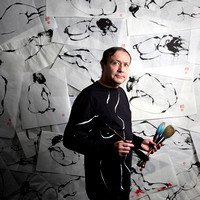 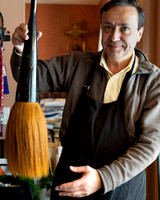 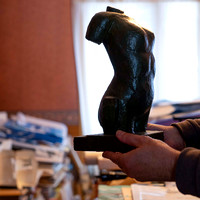 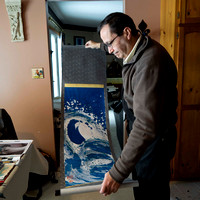 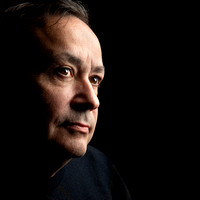