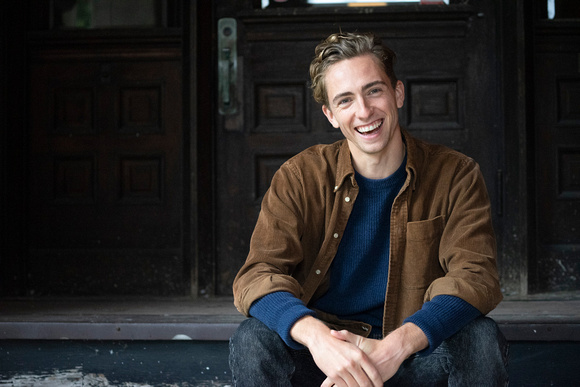 Colton Curtis is an actor from Canada's East Coast. He began performing at an early age in his home province, New Brunswick. Colton participated in the Theatre New Brunswick theatre school. Upon graduation from high school he moved to Ontario, to attend the prestigious Bachelor of Musical Theatre program at Sheridan College, where he received the Brian Lineman triple threat award for each year he attended. Between his years at college, Colton spent summers working for The Charlottetown Festival, as well as training with the Florence Ballet Company in Florence, Italy, and performing with the Finger Lakes Music Theatre Festival, in New York state. Colton was fortunate enough to graduate early in order to begin working at one of North America's greatest repertory theatre companies, The Shaw Festival, where he appeared in Sweet Charity, Peter and the Starcatcher, and Light Up The Sky. The following year he debuted at the critically acclaimed Stratford Festival, starring as Mark Anthony in A Chorus Line. Since 2016 Colton has had the privilege of continuing his work at the Stratford Festival in Guys and Dolls, HMS Pinafore, The Music Man and The Rocky Horror Show. Most recently Colton played older Billy in the critically acclaimed Billy Elliot: The Musical.


And a little more,
Since covid hit I found myself really looking for a way to 1) create jobs for myself, but more importantly, use my creative mind. I’ve also found peace in art. Wether that means looking at it, watching it happen, or creating it. I went through ideas of writing a book, creating a magazine, sewing clothes, modelling. And then I just really committed to the thing I had access to during a pandemic - photography.

I began taking pictures on a vintage film camera about 6 years ago now. Eventually I upgraded, and began using the Nikon system. I had always loved taking backstage photos while working on shows. Once our rehearsal processed stop because of covid, I really pushed myself to use my camera more - I would go for drives and take pictures of anything and everything, giving myself little photography assignments to complete.
Eventually I decided to share it via an Instagram account @coltoncurtis.jpg, and my little business took off. I couldn’t be more thankful.
Terry Manzo
Powered by ZENFOLIO User Agreement
Cancel
Continue